This couple had their patience tested to its limits with a 7 month wait to move to the Netherlands! The wait was worth it! :) 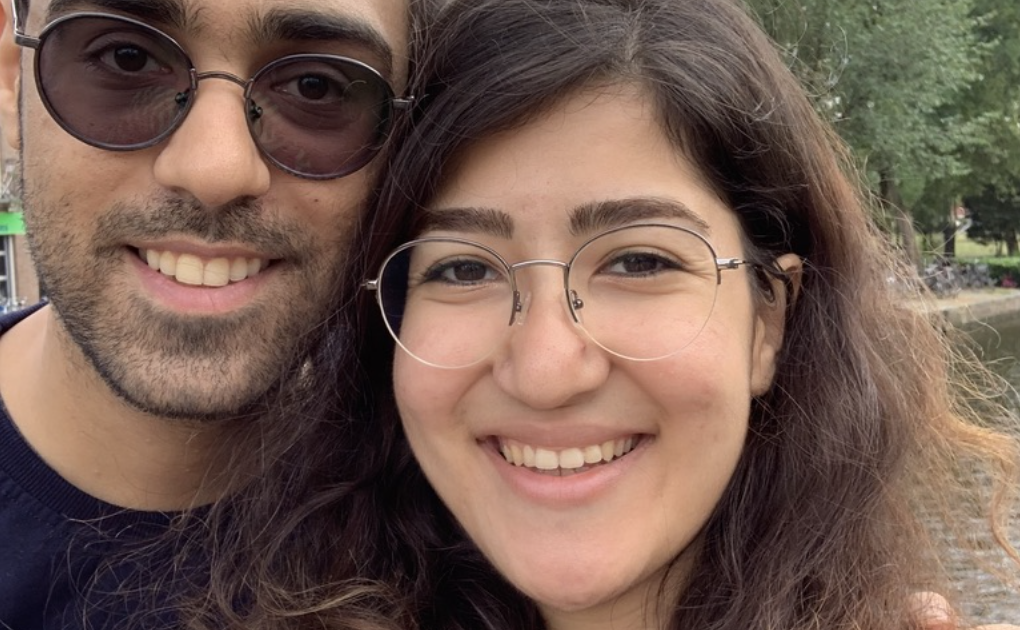 Mehrnoosh moved to Amsterdam from Tehran, the capital of Iran in July 2019 with her husband, Aram. Tehran is the capital city and she recounts fondly that despite the city being crowded and polluted she loves the chaos. “There are many different cultures in the capital so it has a very diverse atmosphere. The traffic is crazy though!”

Mehr & Aram in a Snapp Cab (Iran’s Uber) on their wedding!

“People may say one thing, but they don’t mean it exactly. They do this to be polite and kind to you, but at the expense of telling you the truth! The expression for this type of communication is called “Taarof” in Persian which has no English translation. Taarof between friends, or a host and guest, emphasizes the value of friendship as a priority to everything else in the world. At a friend’s home, for example, the host asks the guests to stay for dinner. They might have just said it to be polite, but you take it seriously and stay. However, That’s not always the case. Or at the shop, for example, you ask how much an item is and the shopkeeper would say ‘oh no need to pay’ but this isn’t true, because you do!”

Other than friends and family she really misses the food! Persian cuisine is amazing! Full of different flavors and spices. There are some Iranian restaurants but as she says “Nothing beats mom’s cooking!” She misses her old neighbourhood which had lots of cool restaurants serving local delicacies. One aspect of home she doesn’t miss is that as a woman in Iran, you are forced to cover your hair and wear “Hijab”. Now that she is in the Netherlands she is free to be herself and dress the way she wants!

After being married for 7 months the newly married couple decided to immigrate to another country seeking freedom and better opportunities. Her husband started to apply for jobs in Europe and after some time of searching and interviewing he got offered a job in Amsterdam which was very exciting news at the time. "I’m so thankful to my husband for his endeavour and hard work that helped us being able to immigrate to the Netherlands and raise our future kids in this amazing country."

It took 7 months to move from Iran to Amsterdam due to the sanctions imposed by the USA against Iran. “The agency that my husband’s company was using was based in the US and was restricted in being able to help us due to the sanctions. Things were unclear during this time as we sold all our stuff in preparation for the move, but we ended up having to stay another 5 months longer than planned. My husband’s employer was amazing and their lawyers managed to get it sorted in the end! It was a rollercoaster of emotion” She recounts that although it was a stressful time for them, the pressure was more on her husband and his employer to get the situation sorted. “I had faith it would all work out, but finally getting the news that we were able to move was one of the happiest moments of my life!”

The flight took 9 hours with a stopover in Turkey, before arriving into Schiphol Airport Amsterdam to start a new life. “We arrived on the 23rd of July 2019 and we arrived in the middle of a heatwave! When we got in the taxi to head to our hotel and with the wind blowing in through the window we smiled the whole way because we had made it!”. From the chaos of Tehran’s busy streets to the much calmer Dutch roads we knew new adventures are ahead of us.

Mehr & Aram on the way to Amsterdam at last! Taken at a stopover in the Istanbul Airport :)

“Once we arrived at the hotel we went to a restaurant and because alcohol is illegal in Iran we were inspired to order something. We ended up choosing Grand Marnier, not that we knew what that was, which turned out to be an amazing experience!”

On the hunt for a job!

Her husband having already secured work, Mehr began to start to network in search of work. Using some Apps and checking online events she started to get active and social in her professional community. She attended some 24 events over the course of two months to expand her network in her new city and within two months she got a job at Settly. With all the struggles the couple faced with their own relocation she deeply empathises with anyone going through the relocation process and uses her UX/UI skills to help take the Settly platform to another level!

Blue-headed Mehr enjoying the freedom and summer in A’dam

Hot tips for where to go: