Where to go for a swim when the heat hits! 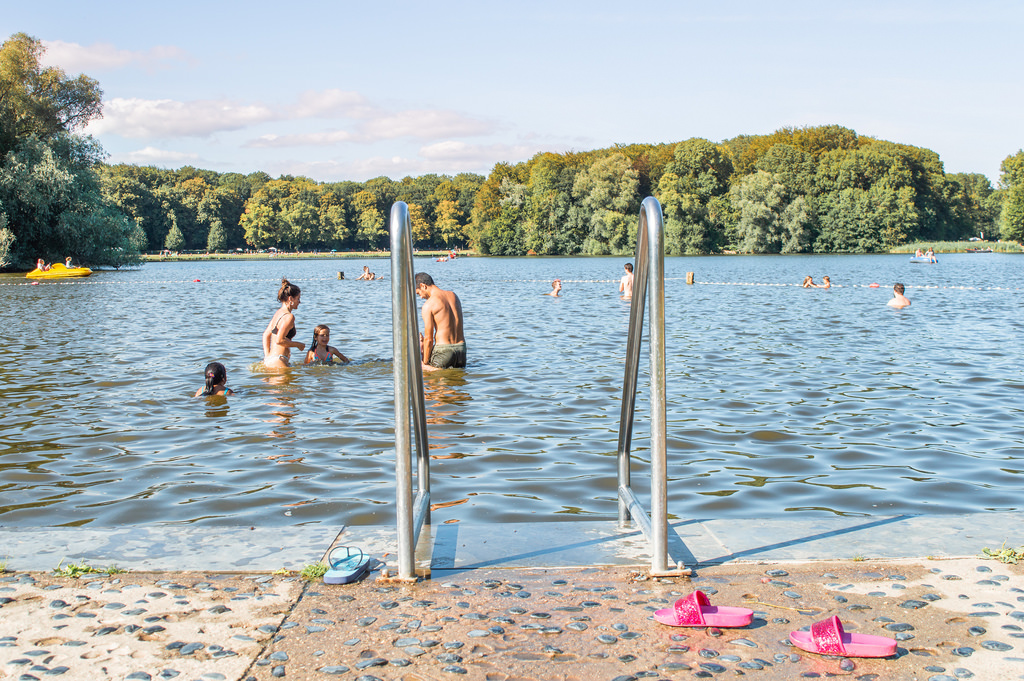 What better way to enjoy sunshine than with a lake and a picnic? Luckily Amsterdam does not disappoint when it comes to the perfect spot for a dip!

Het Twiske is both a recreational area & nature reserve rolled into one! Plans for the area started in the 1960s and since then it has grown to 650 hectares of coverage which consists of one-third water. The area is also known for dairy farming and you are likely to see a cow or two in the area. Located north of Amsterdam City Het Twiske is very accessible by bike, taking about 1 hour to reach with some fast pedalling. Due to the park being about a third water you can appreciate that it is very popular with people who are fond of swimming, sailing or diving. They have many beaches along with a water playground for kids, a diving platform, a farm and much more!

This lake has a long history. Back in 1644, it was a natural lake that went by the name of Slootemeer before it was reclaimed using (yep you guessed it) windmills! The area remained solid ground for three centuries before once again becoming a lake when the surrounding area needed to be elevated for construction. Sloterpark is located in the neighbourhood of Nieuw West which is very accessible by public transport. Sloterplas is known as a place you can rent a sailboat or canoe and take to the waters to enjoy the day. The urban beach is very popular with families and for those preferring an actual swimming pool containing chlorine you can also access the Sloterparkbad in the area!

Amsterdamse Bos is an incredible achievement! It all started back in the difficult times of the 1930s where all the trees were planted by hand to help boost employment during the financial crisis. Around 20,000 people were employed to help build the park which was eventually completed in 1970. The area spans around 1000 hectares making it one of the largest city parks in Europe! You will find this park located to the south of the city in the municipalities of Amstelveen and Amsterdam. Aside from enjoying the natural beauty of the park by walking or biking you can find many spots for a swim in the lakes and even rent out canoes. They also have two paddling pools for kids in the park!

Nieuw Meer was born during the 1950s when much of its sand was extracted for construction purposes within the city. The result of all the extracted sand was a lake with a depth of around 35m. The lake is located just North of Amsterdamse Bos and is accessible by public transport. Since its birth, Nieuw Meer has become a very popular spot for recreational sailing and fishing with two official sports for swimming.

The Dutch are known for their mastery of the land and water which the Gaasperplas highlights this perfectly. The Gaasperplas was constructed back in the 1980’s, using its sand for nearby construction, to host the International Horticulture Exhibition known as the Floriade. Over the years it has been turned into a public park offering its lake, preserved flower gardens and natural beauty to the busy neighbourhoods which surround it. You can find Gaasperplas in the Biljmer area and even has its own metro station making it very easy to get to. Aside from walking around the park and enjoying the flower gardens the area is also known for its watersports centre. You can, sail swim, canoe and windsurf to yours hearts content on the waters of the Gaasperplas that has a maximum depth of around 35m.

These lakes and many in the surrounding area were born due to peat extraction many centuries ago. Fast forward to today however and you have the largest body of fresh water in the whole of North holland! You will find this lake near the Aalsmeer municipality which is reachable by a 15-minute drive from Amsterdam. The lake has around 50 marinas on its banks which are just begging to be explored which can be done by boating, sailing, water skiing or canoeing. For those who love the land then there are extensive biking paths to enjoy the lake as well!

Beatripark is one of the oldest modern-parks to be created within Amsterdam. It came into life in the 1930s and nowadays is very popular amongst families. Initially created as a romantic park it was redesigned to be more functional after World War 2. Today is it very popular amongst families and is a great sport for a family day out! You will find Beatrixpark located behind the RAI congress centre in Amsterdam-Zuid. Beatrixpark made it onto the list because of its paddling pool for children which makes it the perfect place for families and their little ones!